on May 16, 2020
Dad's uncle with his friends. Hanoi, Indo - China, 1952. The printed photograph (the original hardcopy from which this image is scanned) is very unusual. It's slightly bigger than a postage stamp with serrated edges - like a postage stamp - on the two shorter sides. It was possibly torn out of a strip of similar sized photos. This picture was sent to my grandma in Tellicherry. Granny being this man's younger sister. I'm guessing there would have been an accompanying letter but that's not around anymore. 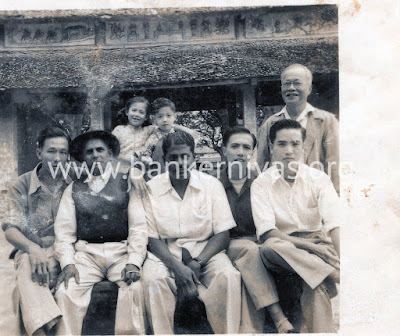 I like what's in the picture. It's a man on an outing with friends. Going through the albums I came across several such pictures. Across places. Across generations. Here or away, now or then, some things don't change. I'm also fascinated by the cosmopolitanism of the scene. There are Indians, Chinese and Vietnamese men in the group. They have all been enjoying the sights outside Saigon and it appears to be a close set of buddies.

I just couldn't resist describing the scene as:
Indians and Chinese hanging out in Indo - China.