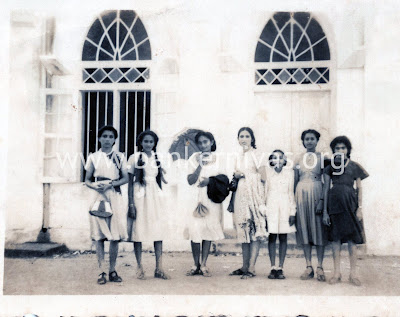 The folks in the picture could be friends of my grand uncle. Or maybe not. As his younger sister -   my grand aunt - described it: he would walk around with a camera taking pictures randomly.

A group of women, of varying ages, in their Sunday best, on their way to Church. Did he know them? Or was he a complete stranger? It's intriguing that they agreed to pose. The picture is a fleeting glimpse of an era that would vanish forever - the mid century Colonial India.

In the decades to come, the attires would change across both Mahe and Pondicherry.
1940's Church Pondicherry