on May 03, 2020
The classic family portrait. Bombay, 1942. Quite a few such pictures of various families. In this one, Grandpa, Grandma, Dad (on the high stool) and his two sisters. The Madras aunty on the left, the eldest sister - who passed away in her teens - on the right. 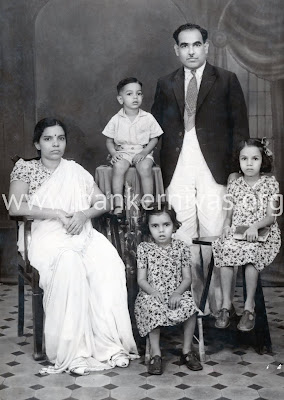 Typical of the age. Proud father gazing straight ahead. The wife wondering if all the fuss was really required. And the fidgety kids enticed into looking at the photographer. Note the matching tops. Reminds me of the sitcom Wagle Ki Duniya on Doordarshan.

I saw this photograph only as an adult. It was stashed away along with the others at Banker Nivas. After my parents moved back from Hyderabad, Dad had it framed and hung up on the wall. While it was amusing to see Dad at this age, it was actually Grandma who caught my eye. Grandpa passed away decades ago; not many years after this picture was taken. Achamma we would meet every year during our summer holidays. However it was only when I was at university in Kerala, that I really got to know her. That's when I began going to Tellicherry on my own - not accompanying my parents. One of the things I did in those 4 years was to begin speaking to her in Malayalam. Until then she always spoke to my siblings and I in English. Growing up we would speak to Dad in English and to Mum mostly in Malayalam. Or at least our version of it. And Achamma would assume that we wouldn't be comfortable in Malayalam - which was true - and speak to us in English. But those four years at Kerala, changed that. I began talking to her in Malayalam and both of us got comfortable with it.

For the last 10 years of her life she stayed with her doctor daughter in Madras. She passed away a few years ago at 96. As always very physically active till the end. Everyday she would wake up early in the morning, bathe and wash her clothes herself, have a coffee and read the newspaper. Sometime during the day, she would have a glass of ice cold Coca Cola. The brand didn't matter - it had to be ice cold though. In the afternoon she would take a nap. On the last day, nothing changed except she didn't wake up after her nap. I used to meet her in Madras often when she was around. While parting she would hug and kiss generously. As if each parting might be the last. I did her last rites in Tiruneli, Wayanad. Dipping in and out of the cold water hoping she will be at peace. Curiously feeling at peace myself.

There was always a quiet dignity about her. She lived and died without making a fuss. To me she was this old lady. Always in white. Till I saw this photograph. She's young. She's not in white. And she's in peep - toes!
1940's Bombay Family Portrait