Pieces In A Puzzle

on May 16, 2020
A letter from Indo - China. The husband of Dad's aunt, writing to Dad's father in Bombay. As a kid I remember seeing other similar letters - in Malayalam accented with French. Old, on the verge of tearing up. By the time I began organising these archives as an adult, those letters were no longer there. Fortunately for me, this letter was squeezed onto the back a photo post card. The photograph in the front of the card - the writer, his wife and her brother. So the photograph went into the albums and the letter survived. 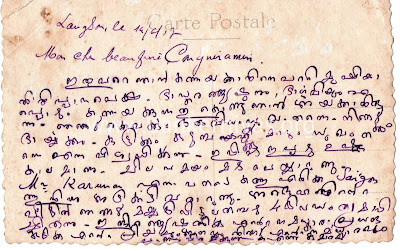 The date is not legible but based on the contents it's probably from the early to mid 1930s. It seems to have been written soon after the writer and his wife reached Indo - China.

I wonder if that journey was undertaken soon after they were married. It describes the journey from Mahe (Kerala, India) to Indo - China. With a break of a few days at Singapore visiting Dad's grand uncle.

It's clear from the letter that when the letter was written Dad and his older sister were not yet born. Likewise with Dad's older cousin - the writer's son. And Dad's oldest sister was only a toddler or younger.

The writing is warm and affectionate. I wasn't expecting that. Then again, I wasn't expecting this letter itself. Dad's father died young. Dad was 9. He didn't speak much of his father or anyone else for that matter. So I only had a vague idea of grandpa. And here's this letter from a man I knew about even lesser. Yet they seemed to have been close. Over the years I have been trying to piece together a picture of grandpa in my mind. A stray remark from a distant relation here, a photograph there. Everything adding up slowly but surely.

This letter is another piece in that picture.