From Hanoi, With Love 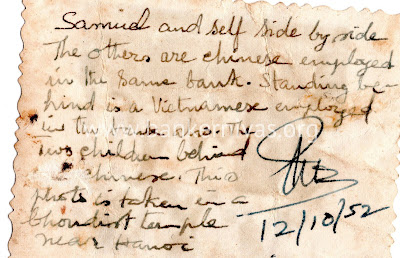 This paragraph was squeezed onto the back of a photograph. It was sent from, Indo - China by my grand uncle (Dad's uncle) to his younger sister my grandmother at Banker Nivas in Tellicherry. I'm guessing there would have been an accompanying letter though that's not around anymore. Since this was behind the picture, that went into the albums and so this survived. It's dated 1952.

What first caught my eye was the handwriting. I can barely read my own handwriting and then there is this paragraph from 70 years ago more legible than anything I have written. Then there's the content. The utter normality of what's being described. Here's a man on an outing with his friends. India or Indo - China, some things don't change.
1950's China Diaspora Friends Hanoi Indo - China Post Cards Vietnam