on July 19, 2020
Kerala, 1950s. A picture of a skit or play. I don't know the folks in the picture but they are very likely to be either Dad's or his sister's college mates. The place is either Tellicherry or Thrissur.

I found this picture striking. When it was taken, India was still a young nation. It has not been very long since she attained Independence and declared a republic. In this young nation, the process of nation building takes multiple forms. While there are the top down approaches involving language, there's also the bottom up approaches happening across the country - from the individual scale such as those post cards written by an uncle to his nephews, to the mass scale of Bollywood movies of this period. 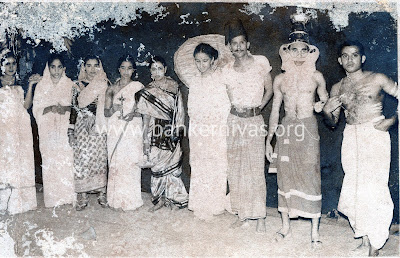 Somewhere in that spectrum of nation building approaches, comes this: the 'All Indians Are My Brothers And Sisters' a.k.a 'Unity In Diversity' skit. For many Indians of a certain generation - including yours truly - this was a familiar theme. To be trotted out regularly for annual day functions at school or college. Our generation - India's Baby Boomers, so to speak - were jaded. We took for granted what we saw. Unlike us, those in this picture belonged to the generation who lived through Independence. Midnight's Children in a way. Flush with youthful hope, the students here are fashioning a republic, forging a disparate people into a nation. One skit at a time.

Ignoring big picture / romanticized notions of Post Independence Nation Building, and zooming back into the individual scale, what we have here are a bunch of college kids articulating what's likely to have been their lived experience. An experience that I would also share at college in Kerala, more than 40 years after this picture was taken.