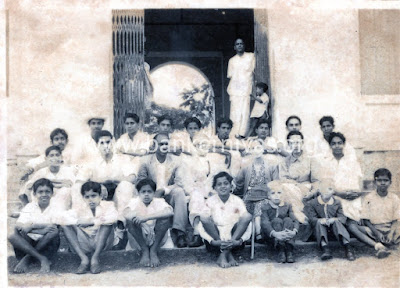 A class group photo. This is from either St Joseph's, Tellicherry or St Aloysius,  Mangalore. Given the age range of the kids in the picture, this need not be a single batch - it could just as well be a school group picture taken after some sort of sporting event.
The class group photo is a tradition that lives on to this day. There's a bunch of them in the albums. From across generations and geographies. Irrespective of place and year, they follow the same template. Children lined up on steps or benches - smaller kids up front, taller kids in the back. The Princi and Class Teacher front and centre with their beatific smiles. The children wearing their best white uniforms and polished shoes (at least in the later generations). Ties and badges where applicable - some smiling, most of the rest looking glum, and that one kid who simply had to blink just when the shutter clicked.
Photos that were carefully stacked away in albums to be delicately - and earnestly - dug out at appropriate occasions. Usually for the benefit of the spouse or the later generations for a quick game of Find Me If You Can.
A game which the spouse or later generation, would inevitably win.
1950's St Josephs Tellicherry Student Life Tellicherry